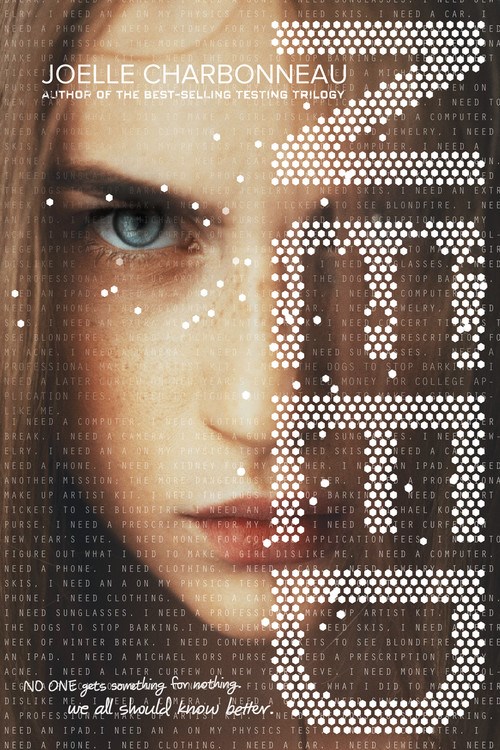 "No one gets something for nothing. We all should know better."

Teenagers at Wisconsin's Nottawa High School are drawn deeper into a social networking site that promises to grant their every need . . . regardless of the consequences. Soon the site turns sinister, with simple pranks escalating to malicious crimes. The body count rises. In this chilling YA thriller, the author of the best-selling Testing trilogy examines not only the dark side of social media, but the dark side of human nature.

I have a tendency to pick up a “thriller” and be disappointed less than halfway in.  I guess I just don’t find the majority of them very thrilling or exciting, and yet, I keep reading them.  I’m always searching for one that will live up to its amazing sounding synopsis, and the past few that I’ve read have been pretty good.  NEED was in that category.

This book is told from the perspective of a few students in the same high school.  Okay, at the first this was a little overwhelming and when there are just so many characters in the beginning of a book, it kind of makes me not want to read it.  But I decided to stick it out and see where it went anyway.  After a while, it became a little easier to keep up with the ever changing POVs, and since they’re all connected to the same story in the long run, it makes a bit of sense.

The general idea behind NEED is this:  At a high school full of selfish teenagers, there is a new social networking site sending out an invitation to one student.  The student is asked what he or she “needs,” and in return, they are required to do something – such as send out an e-mail invite to two more students.  The next person to sign up might have to send out an invitation to three or more students in order to have their “need” fulfilled.  But what happens when everyone in the school is already on the site?  Then, NEED starts asking the students to do other things…things that might not be so simple and harmless.  Things that might end up getting the students hurt, or worse.  But as long as they do what is asked of them, that student will get what they “need,” whether it be something simple like a an iPhone, or something a little more complicated.

Of course, the teenagers in the school are all too happy to join the site and start requesting things.  However, how far will they go to get things that they want?  Would they really hurt someone else, just to get something that they ask for?

The thing I liked most about this book is the fact that I can see something like this actually happening in the future.  Sure, there’s a not-so-hidden message throughput this book, but a lot of people don’t seem to be bothered by the idea of doing absolutely anything to get what they want, even it if means hurting others.

NEED really was a great story, especially if you can get past the tons of characters that are pretty much just thrown at you in the beginning.  Since we only get to read from their POVs in short bursts, it can be a little daunting, but it’s worth it.  I found myself having to write each character down so I remembered what their role was in the story, because I was constantly forgetting.  I’ve done this a lot with other books too, especially fantasy books where there are a lot of characters to remember, and it tends to help quite a bit.

The plot in NEED was executed really well.  It pretty much had to have all of those POVs in order to play out in the fashion that it did.  It was definitely different, and had that science-fiction vibe to it, which is probably why I loved it so much.

If you’re like me, and you’re always searching for a great thriller too, then give this one a go.