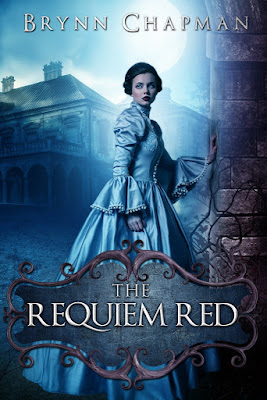 A monster roams the halls of Soothing Hills Asylum. Three girls dead. 29 is endowed with the curse…or gift of perception. She hears messages in music, sees lyrics in paintings. And the corn. A lifetime asylum resident, the orchestral corn music is the only constant in her life.

Mason, a new, kind orderly, sees 29 as a woman, not a lunatic. And as his belief in her grows, so does her self- confidence. That perhaps she might escape, might see the outside world.

But the monster has other plans. The missing girls share one common thread…each was twenty-nine’s cell mate.

Will she be next?

1. Where did you come up with the idea for The Requiem Red?

I love to study abnormal science. I came across the concept of synesthesia:

“Synesthesia (also spelled synæsthesia or synaesthesia; from the Ancient Greek σύν syn, “together”, and αἴσθησιςaisthēsis, “sensation”) is a neurological phenomenon in which stimulation of one sensory or cognitive pathway leads to automatic, involuntary experiences in a second sensory or cognitive pathway.   People who report a lifelong history of such experiences are known as synesthetes. Difficulties have been recognized in adequately defining synesthesia:  Many different phenomena have been included in the term synesthesia (“union of the senses”), and in many cases the terminology seems to be inaccurate. A more accurate term may be ideasthesia. In one common form of synesthesia, known as grapheme → color synesthesia or color-graphemic synesthesia, lettersor numbers are perceived as inherently colored.   In spatial-sequence, or number form synesthesia, numbers, months of the year, and/or days of the week elicit precise locations in space (for example, 1980 may be “farther away” than 1990), or may appear as a three-dimensional map (clockwise or counterclockwise).  Only a fraction of types of synesthesia have been evaluated by scientific research.   Awareness of synesthetic perceptions varies from person to person”

As with many ailments in history–when our forefathers and those in Europe could not understand something, they automatically feared it, labeled it as evil.

I also have a nearly eidetic memory for music…and can discern sounds that others apparently cannot. My co-workers laugh at my benign ‘superpower’. That being said, music lives in my head, 24-7–so i thought to combine the two–where a woman, a violinist, not only paired her musical notes with patterned colors, but hears words, placed within the music.

Schizophrenia? Hallucination? Something else entirely?

2. Did you uncover a lot of interesting history while doing research that you were unable to include in the book?

That is ALWAYS the case. I will share one…

The asylum i toured was vast, with a very large population of residents. I was told, once they had a massive fire break out, and had the need for evacuation. Staff and residents were panicking…how in the world would they be able to evacuate a throng of people who had difficulty maintaining attention and following directions in the calmest of times?

Enter the fast-thinking nurse, who knew her patients well. What did she do?

She took the dinnerbell and rang it. The throng filed in, as they did each and every day to eat. She rang it out the door, and out of the burning asylum so that no lives were lost. #goNurses

3. What was the experience of writing The Requiem Red like?

Sad and wonderful all at once. Here is a great visual representation for Requiem Red. I create a pintrest board for everyone of my books. It helps to ground me in the book’s world and quickly remove me from my own.

The cold is a character in the book–the asylum is frigid in winter–the way Jane feels about her entire life before it is irrevocably changed. SO from the concept of cold as a killer, to all the wonderful experiences of cold. If experienced with love, friendship and support. 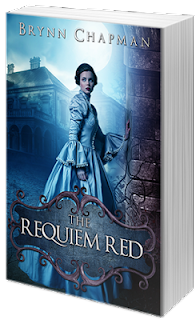 Follow the The Requiem Red by Brynn Chapman Blog Tour and don’t miss anything! Click on the banner to see the tour schedule. Born and raised in western Pennsylvania, Brynn Chapman is the daughter of two teachers. Her writing reflects her passions: science, history and love—not necessarily in that order. In real life, the geek gene runs strong in her family, as does the Asperger’s

syndrome. Her writing reflects her experience as a pediatric therapist and her interactions with society’s downtrodden. In fiction, she’s a strong believer in underdogs and happily-ever-afters. She also writes non-fiction and lectures on the subjects of autism and sensory integration and is a medical contributor to online journal The Age of Autism.

She also writes under the pseudonym R.R. Smythe.