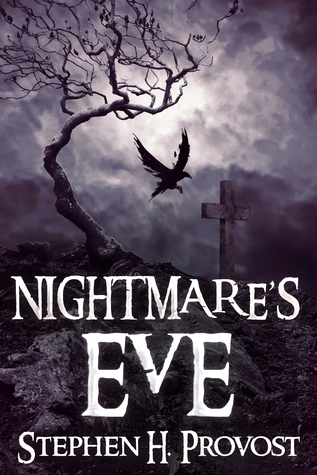 A collection of 16 short stories and 10 dark poems in the tradition of “The Twilight Zone.”

Trapped for eight centuries in a space no larger than a shoebox. What would you do to escape? How far would you go to rid yourself of that parasite in your brain that feeds off the worst of your nightmares? What if the person closest to you were fated to die – and you were powerless to stop it?

What if your savior were also your greatest fear? Would you trade years of your life for a chance at redemption? Would you slay or spare the dragon whose eyes gaze up at you pleadingly in the final moments of its life?

These are the questions that run through the mind when twilight fades and eyelids grow heavy. Fight the onset of sleep. Thrash beneath the covers in futile defiance of what lies beyond. This is the between-time of Nightmare’s Eve, those brief but lingering moments between the waking world and the abyss. It will have you. It’s only a matter of time.

Santa Claus. The tooth fairy. The boogieman. During my childhood, the things I believed in seemed to slip away from me one by one. No matter how tightly I clung to them, there was always something that burst the bubble of what I discovered, a few years short of the precipice that is puberty, to be pure fantasy.

Such ideas, I came to realize, had been planted in my mind by grownups who had abandoned their own beliefs in such things, with equal reluctance, before I was born. They couldn’t look each other in the eye and admit to accepting them, so they passed the beliefs on to me and other kids so they could believe in them vicariously through us.

This is how fairy tales survive for centuries while the historical deeds of real men and women who lived and died and made some sort of difference in the world get forgotten. It’s how kids get disillusioned with their parents, and with the stories they hear in childhood.

Do I sound bitter?

Well, when you lose your mother at the age of seven and you find out years later that it had something to do with one of these fairytales, then you can talk to me about it. Try growing up without a mom — and with a father who hid the truth from you — and tell me you wouldn’t be bitter about it, too.

As I grew older, like most kids, I left those fairytales behind. Over time, they faded into the forgotten corners of my childhood with the memories of family Christmases and kindergarten and Cub Scouts.

But one conversation always stuck with me. It was something my grandpa taught me; I’m not sure whether he’d heard somewhere or made up himself: “There’s no better way to conceal a lie than behind a thousand truths, and there’s no better way to conceal the truth than behind a thousand lies.” Considering what’s happened since, I don’t think he shared this wisdom by accident. He was, after all, Mom’s father, and I suspect he knew what was going on. He just didn’t want to make things worse by telling me. I don’t blame him. I’m not sure I wouldn’t have made the same decision myself.

The saying has to do with Mom. And those fairytales. You see, I’ve come to believe that the lies we call children’s stories, the ones that have been passed down to us for generations, have a very real purpose. They aren’t just meant to entertain us until we outgrow them, and they’re supposed to distract us from learning the truth.

And they’re not at all what they appear to be, because the stories about dragons themselves are largely lies, meant to cover up humanity’s shame at what we’ve done.

Oh, it’s no secret — according to the stories, at least — that human beings drove dragons to the brink of extinction, just as we did with the passenger pigeon and the black rhino, and the Tasmanian tiger, which died out for the same reason: It was hunted and exterminated to protect livestock.

The same might be said for dragons, but, I learned, dragons were different. Humankind declared war on them hundreds of years ago, during the Dark Ages, long before we eradicated the passenger pigeon or hunted the black rhino into oblivion.

But there’s something about the comparison that doesn’t quite fit. The human population was

much smaller back then, and we didn’t have hunting rifles or elephant guns at our disposal. So how could this have happened? How could men, armed with nothing but swords and spears and longbows, have conquered flying beasts that breathed fire and rode the wind on wings that made condors seem like sparrows?

They couldn’t have, obviously … which is why it’s easy to dismiss the stories of the dragons’ demise as just another children’s fairytale. In fact, that’s just what I did. Until I found the manuscript, that is.

Stephen H. Provost is a veteran editor, reporter and columnists with more than 30 years of experience at daily newspapers in California. He’s currently the managing editor of The Cambrian on the Central Coast, as well as a columnist and assistant city editor for The Tribune in San Luis Obispo.
As an author, he has written historical nonfiction (“Fresno Growing Up” and “Highway 99: The History of California’s Main Street”), novels (“Memortality” and “Identity Break”), while also exploring the realms of mythology, fable and ancient history.