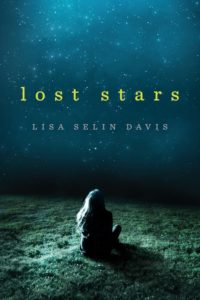 Synopsis: Before her older sister, Ginny, died, Carrie was a science nerd, obsessively tracking her beloved Vira comet. But now that Ginny is gone, sixteen-year-old Carrie finds herself within the orbit of Ginny’s friends, a close-knit group of seniors who skip school, obsess over bands (not science), and party hard.

Fed up with Carrie’s behavior, her father enrolls her in a summer work camp at a local state park. Carrie actually likes the days spent in nature. And when she meets Dean, a guy who likes the real Carrie—astrophysics obsessions and all—she starts to get to the heart of who she is and who she wants to be.

“A moving real-life problem novel…Fans of Rainbow Rowell’s Eleanor & Park and Stephen Chbosky’s The Perks of Being a Wallflower will dig this book.”—School Library Journal

“Lost Stars is a novel for anyone who’s every grappled with their own place in the universe.” —PopSugar, Best YA of 2016

As far as contemporaries go, I have always had a soft spot for them.  There seems to be one to fit every emotional state…happy, sad, deep, and even flirty romances that make you laugh and swoon over the characters.

Lost Stars falls into the deep contemporary area, with plenty of self discovery and moments that make you actually think about how this book fits in with your own lifestyle.

Carrie has always been a good girl – working hard in school, spending time with the right kind of people, and doing things that made her father proud.  However, when tragedy strikes and claims the life of her older sister, Carrie finds herself changing – and not for the better.  Suddenly, she’s partying and hanging out with the wrong crowd, as well as getting into trouble on a regular basis.  When  her father finally decides that he has had enough of her behavior and can no longer provide Carrie what she needs to help her be the best she can be, he signs her up for a summer work camp.  While Carrie is originally very upset by having to spend her entire summer working at a state park, she finds herself drawn to spending time in nature, and actually starts to let go and enjoy her time outdoors.  Then she meets a guy, Dean, who helps Carrie to deal with her grief and the poor choices that she has made since her sister’s death.  He likes Carrie for Carrie…not someone who she tries to be to make other people happy.  Carrie has to come to terms with the death of her sister, as well as the mess she is making of her life, and tries to get herself back on the right track.

I liked both Carrie and Dean.  While Carrie had a difficult time dealing with her sister’s death, and she more or less did a complete 180 from what type of girl she was before, it was understandable that she would end up feeling this way.  Dean really liked Carrie for Carrie…even though she was a bit of a nerd before her sister died and was unable to show that side of herself when she was with her new “friends.”  Dean helped Carrie find herself though all of the grief that she was dealing with.

Lost Stars is the kind of novel that you want to devour in one sitting – it’s heartbreaking and deeply moving. 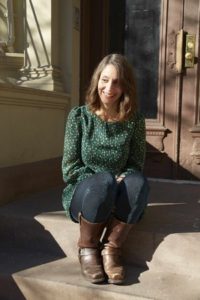 I’m super crazy excited to have my first YA novel, Lost Stars, come out in October 2016. I also have a novel for grownups called Belly, published by Little, Brown a few years ago. For the last 12 years or so, I’ve paid my rent by writing articles for The New York Times, Time, The Wall Street Journal and a zillion other publications. Before that I worked in film and TV, doing props and other art department jobs, including a four-year stint

making props for Nickelodeon’s Blue’s Clues. I live in Brooklyn (but, hey, I moved here before it was cool) with my hubby, two kiddos and our kitty.

3 winners will receive a finished copy of LOST STARS, US Only.