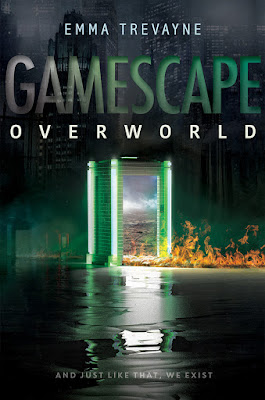 The planet is dying. Centuries of abuse have damaged the earth beyond repair, and now all the authorities can do is polish the surface, make the landscape look pretty to hide the disease within. Two prominent yet mysterious businessmen couldn’t fix it, either, but they did something even better. Together, they invented Chimera, the most complex and immersive virtual reality video game the world has ever known. The Cubes in which Chimera is played quickly became a fixture of this landscape: part distraction, part hospital, and almost wholly responsible for holding up the failing world economy.

Miguel Anderson is also dying. He isn’t the only one who plays the game–everybody does–but Miguel has more reason than most: When players leave their Cubes for the day, the upgrades and enhancements they’ve earned for their virtual characters leave with them. New lungs to breathe poisoned air, skin that won’t burn under the sun are great and everything… but Miguel, born as broken as the earth, needs a new heart–and soon–if he wants any hope of surviving just a little longer.

Then the two Gamerunners announce a competition, with greater rewards and faster progression than ever before, and Miguel thinks his prayers have been answered. All he needs to do is get picked to lead a team, play the game he’s spent years getting good at, and ask for his prize when he wins. Simple, really.

At first, things seem to go according to plan. Mostly, anyway. Inside his Cube, with his new team–including his best friend–at his back, Miguel begins his quest. He plays recklessly, even dangerously, for someone whose most vital organ could give up at any moment, but his desperation makes him play better than ever. The eyes of the world are on him, watching through status updates and live feeds, betting on his chances. With greater rewards, though, come greater risks, and the Gamerunners seem to delight at surprising the competitors at every turn. As he ventures deeper into a world that blends the virtual and the real to an unsettling degree, Miguel begins to wonder just why the game was invented at all, and whether its stakes could be even higher than life and death.

Gamescape is an interesting science fiction novel that is also part thriller.  I’ve read a lot of science fiction thrillers under the YA genre, and I found myself enjoying some, and having a difficult time getting into others.  In some of these books, the writing seems a bit too cheesy, and everything seems kind of forced, but that isn’t true for Gamescape.  This book had great, addictive writing, and characters that you couldn’t help but love.  Everything in the book flowed nicely, which made it a really fun read.  Also, it seemed to me that there was a bit of a dystopian thrown in there – this book was quite the mix of genres, but instead of feeling out of place, everything came together quite nicely.

Another part of this book I really enjoyed was how real it felt.  The Earth is dying because everyone just keeps adding to the pollution, litter, etc., and causing the entire planet to finally just become unable to sustain human life any longer.  This is scary, considering how bad we’re messing up the planet now…it makes you wonder if this is really how life is going to be in the future (possibly even not so distant?).  It’s a really scary thought, and  it opens up a world of other thoughts that accompany it.

Miguel’s character was so easily likable, and I found myself loving to watch how his personality grew throughout the course of the book.  I’m huge on character development, so this was fantastic.

Since I’m a video game nerd, I really found myself drawn to this one, and I definitely would recommend it to fellow nerds (and those who love a great science fiction novel)!

Follow the Gamescape: Overworld by Emma Trevayne Blog Tour and don’t miss anything! Click on the banner to see the tour schedule.

YA sci-fi/cyberpunk writer. Fan of words and music and chocolate. Represented by Brooks Sherman of FinePrint Literary Management. My first novel, CODA, will be out Spring 2013 from Running Press Kids, and its sequel, CHORUS, will be released the following year. 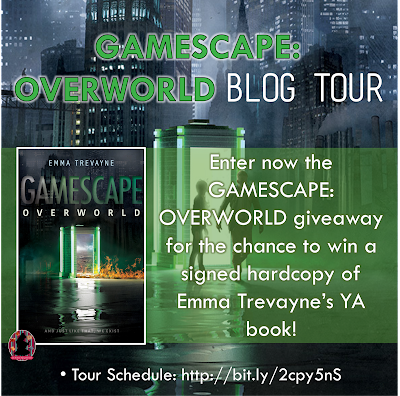 INTERNATIONAL | Rules & Conditions in the rafflecopter

Like playing video games?  Check out this huge gambling entity in bingo now!