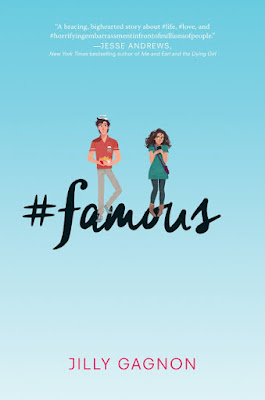 Synopsis: In this modern-day love story, Girl likes Boy, Girl takes photo of Boy and posts it online, Boy becomes accidentally insta-famous. And what starts out as an innocent joke spirals into a whirlwind adventure that could change both their lives—and their hearts—forever. But are fame and love worth the price?

Told in alternating points of view, #famous captures the out-of-control thrill ride of falling for someone in front of everyone.

Check out my review for #famous here!

The number of silly, embarrassing, or downright-stupid-and/or-dangerous things I did as a teen is…well, there’s no way for you to know whether the number is staggeringly high, near-nil, or whether any single moment might have completely changed the direction of my entire life.

Some of those moments were recorded, tucked away now in physical photo albums, desperately emo hand-written journals, and the occasional instant-messenger-conversation-printouts (whoa there, high tech). Functionally, though, none of them exist today unless I want to share them.

I had the luxury of growing up JUST before the wave of constant-connectedness and uninhibited sharing that is social media crashed on the shoreline of the new millenium.

I thank my lucky stars for that every single fricking day.

Social media plays a huge role in my young adult debut, #FAMOUS. In the story one casual photo, meant as an inside joke between friends, unexpectedly goes viral, causing a whirlwind of fame, cyber-bullying, and most of all constant visibility that changes both my main characters’ lives overnight.

It’s not only the kind of story that could happen today, it did. Alex Lee is still internet famous, but you may remember him better as #AlexFromTarget, a regular 16-year-old, working as a Target cashier one day…an instant celebrity the next.

But that’s just one aspect of how social media plays out between teens, and if we’re being honest, between adults. For every overnight success story, there’s someone being cyber-bullied over an ill-chosen tweet or snapchat, screengrabbed in one of their least-flattering moments, or pilloried for a slip of the (digital) tongue.

Because that’s the scary part of the internet that we so often choose to forget: all of it is forever. The goofy thoughts I tweet; the pictures of my cats on instagram; the blog posts from almost 15 years ago, when I was a barely-formed Jilly-shaped lump of brain plasticity: they’re all out there.

Some have been deleted of course, or simply buried by the constant avalanche of new information available online. But anyone could find any one of them if they so desired.

I’m 32 years old; I still say mountains of ridiculous and embarrassing things, it’s true, but I’ve had the chance to weigh the pros and cons of putting certain thoughts into digital print, to learn from past mistakes, to speak less often and listen more–in short, to grow up. Today’s teens don’t have that opportunity. Instead, their growing pains are being recorded continuously, by themselves and by their peers, a constant stream of fodder for punishments that far outweigh any crimes being committed. (Unless they’re doing a lot of grand theft auto and then posting proof of it on YouTube, in which case, thank you, YouTube, stealing cars is serious s***.)

The idea of banning teens from social media seems cruel, and more importantly, impossible. The modern, connected era is here to stay.

We can, however, remind teens and adults alike that what you say behind the protection of an avatar, to a tiny picture up in the corner of your screen, matters. Every single one of those little pictures corresponds to a real person, with real feelings, and real fears…unless it corresponds to a bot trying to sell you enhancement pills, but let’s not split hairs. Things that we do IRL almost as a matter of course–bite back our cruelest thoughts, assume there’s some context to most conversations or actions, listen to the other side of the story–we should be doing online, too. Because all those things still apply, they’re just not as immediate-gratification-inducing as a like button, or a vitriolic @ comment.

The cyber-bullies in my story only appear onscreen briefly, felt mostly via the impact they have on Rachel, the target of their snark and cruelty. But each one of them has a story, too, a whole life happening offstage before and after the horrible comments they leave on a stranger’s feed. We all have that, in fact. But social media reduces us to a few words, a tiny thumbnail photo, and a constantly-refreshing stream of chatter that makes it hard to fully imagine our throwaway thoughts having a lasting impact.

So we have to remind ourselves–and our teens–that our words matter, no matter where we’re saying them. We can’t–and shouldn’t–turn back the clock on the internet age. But we should take the time to think about what we’re doing with our newfound power, whether it’s hurting a real-live-someone out there…and whether maybe a kittens-and-sloths video wouldn’t be the better option, at least every once in a while. Jilly Gagnon is currently based in Chicago, but is originally from Minnesota, a fact she’ll likely inform you of within minutes of meeting you. Her humor writing, personal essays, and op-eds have appeared in Newsweek, Elle, Vanity Fair, Boston Magazine, McSweeney’s Internet Tendency, The Toast, and The Hairpin, among others.

She writes both humor and young adult fiction. She’s represented by Dawn Frederick of Red Sofa Literary (for humor) and Taylor Haggerty of Waxman Leavell

Never Too Many Books to Read – Review

Library of a Book Witch – Review