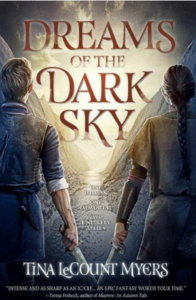 Dreams of the Dark Sky (The Legacy of the Heavens #2)

Synopsis: In the aftermath of a devastating clash between gods and men, two unlikely allies?one immortal and one human?must band together to survive in the sequel to the epic fantasy debut The Song of All.

The war between men and immortals that raged across the frozen Northland of Davvieana has ended. For men, the balance of power between Believer and Brethren, between honoring the gods and honoring the sword, has shifted to favor priests over Hunters.

But it is the legacy of one man’s love for his son that shapes the lives of all who survived.

While Irjan, the once-legendary immortal hunter, has saved his son’s life, he cannot save Marnej from the men who will make him a killer, nor can he save the immortal girl he’d promised to protect from the secret of her birth.

Raised by Irjan among the immortals, Dárja has been trained to fight by a man who once hunted her kind. Prisoner among the humans, her hatred for them is challenged by the chance to give Irjan what he has always wanted?his son Marnej returned to him.

Together, Marnej and Dárja, human and immortal, must find a way to trust one another if they are to live long enough to learn the truth behind the secrets and lies that have forged their lives.

Tina LeCount Myers is a writer, artist, independent historian, and surfer. Born in Mexico to expat-bohemian parents, she grew up on Southern California tennis courts with a prophecy hanging over her head; her parents hoped she’d one day be an author. The Song of All is her debut novel. To find out more visit www.tinalecountmyers.com

Click the button below to be taken to the tour’s page and follow along with the rest of the tour!