Blog Tour: A Study In Charlotte by Brittany Cavallaro – Review and Giveaway! 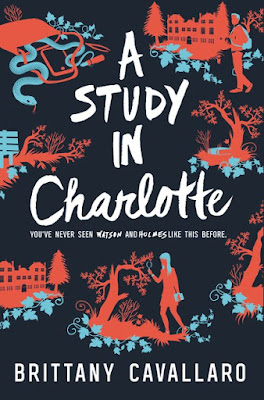 A Study in Charlotte
Author: Britany Cavallaro
Series: Charlotte Holmes, #1
Publication Date: March 1st, 2016
Publisher: Katherine Tegen Books
Synopsis: The last thing sixteen-year-old Jamie Watson–writer and great-great-grandson of the John Watson–wants is a rugby scholarship to Sherringford, a Connecticut prep school just an hour away from his estranged father. But that’s not the only complication: Sherringford is also home to Charlotte Holmes, the famous detective’s enigmatic, fiercely independent great-great-granddaughter, who’s inherited not just his genius but also his vices, volatile temperament, and expertly hidden vulnerability. Charlotte has been the object of his fascination for as long as he can remember–but from the moment they meet, there’s a tense energy between them, and they seem more destined to be rivals than anything else.
Then a Sherringford student dies under suspicious circumstances ripped straight from the most terrifying of the Holmes stories, and Jamie and Charlotte become the prime suspects. Convinced they’re being framed, they must race against the police to conduct their own investigation. As danger mounts, it becomes clear that nowhere is safe and the only people they can trust are each other.
Equal parts tender, thrilling, and hilarious, A Study in Charlotte is the first in a trilogy brimming with wit and edge-of-the-seat suspense.

A Study in Charlotte was an interesting mystery novel that plays on the Sherlock Holmes novel, A Study in Scarlet.  While I honestly haven’t read that, I have to say, this book was written pretty well – it was like a young adult recreation of that, and it was pulled off pretty darn well.  It’s not one of those books that you can read while half asleep (as I’ve learned) because it takes quite a bit of paying attention in order to absorb all the important details regarding the mystery in this book (and believe me, it’s filled with them).  So I had to go back and re-read several parts more than once, but that’s okay, because the book was really enjoyable.

James Watson (yes, a descendant of that Watson) is moved from his comfortable London home that he shares with his mother, and sent to live in a boarding school in the states on a rugby scholarship.  His father, whom he hasn’t spoken to in years, lives nearby, but other than that, he’s pretty much friendless and isolated.  When he comes across Charlotte Holmes (again, yes, a descendant of that Holmes), he feels like perhaps the two of them should be friends, considering that hey, they’re both at this boarding school far away from home, and well, they’re Watson and Holmes – they pretty much have to be friends, right?

As Watson tries to gain her friendship (not very easy, that’s for sure), he comes to see that she really isn’t like any other girl he has met – and she has incredible intelligence and is a fantastic detective.  So, when a student is murdered on campus, and Watson and Holmes are blamed (the student in question had gotten into a fight with Watson earlier, and had tormented Holmes for a very long time), they know they have to partner up in order to clear their names and solve the mystery.  As more crimes start to add up, they realize that they’re dealing with something series – and they race against the clock to discover the real murderer.

The first thing I liked about this book is that it is told from James Watson’s point of view – which is a welcome treat, considering most YA books are told from a female’s perspective these days.  It was such a nice change – James was such a great character – very easy to relate to and I enjoyed reading how he told the story.  While Charlotte Holmes had a bit of a personality that might have to grow on you, I absolutely loved her.  She was real.  She had problems – family problems, friend problems, and even a drug problem, but she wasn’t some fake, quickly thrown together character.  She was interesting and deep, and I loved how the author wrote her.

I also loved how there were references to Sherlock Holmes mysteries throughout the entire book – each crime committed had one, and that was another nice touch that was carefully added.

Seriously, everything about this book is just impressive. Plus the ending brings the entire book together perfectly…and adds a little bow on top.

Since my husband has recently got me hooked on the Sherlock TV series, I knew I would enjoy this book – and I definitely wasn’t disappointed.  It was the perfect YA mystery, and it was such a clever, unique twist on the Sherlock Holmes novels.
I really can’t wait for the next book in this new trilogy! 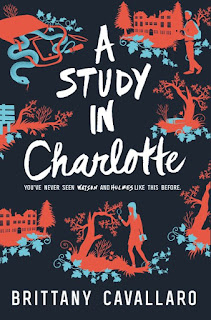 Follow the A Study in Charlotte by Brittany Cavallaro Blog Tour and don’t miss anything! Click on the banner to see the tour schedule. 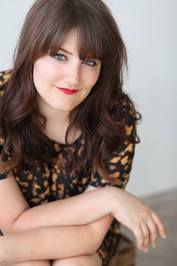 Brittany Cavallaro is a poet, fiction writer, and old school Sherlockian. She is the author of the poetry collection Girl-King (University of Akron) and is the recipient of a National Endowment for the Arts fellowship. She earned her BA in literature from Middlebury College and her MFA in poetry from the University of Wisconsin-Madison. Currently, she’s a PhD candidate in English literature at the University of Wisconsin-Milwaukee, where she teaches creative writing, detective fiction, and lots of other things. She lives in Wisconsin with her husband, cat, and collection of deerstalker caps. Find her at her website, brittanycavallaro.com, or on Twitter @skippingstones. 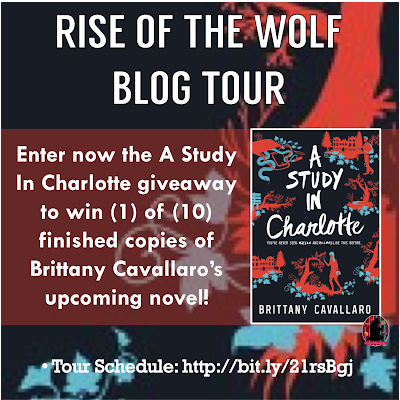